Drake & Headie One – Only You (Freestyle) 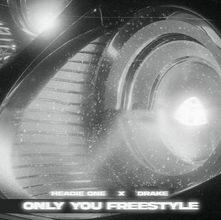 A Canadian rapper, singer, songwriter, record producer, actor, and entrepreneur, Aubrey Drake Graham popularly know as Drake, venture into the UK Drill genre, teaming up with rising UK star Headie One for a hard-hitting track filled with many bits of UK slang and references to locations all over Europe and much of the Eastern Hemisphere.

The song comes after Drake’s December 2019 track, “War,” a more UK-inspired drill track, and his May 2020 track “Demons,” which takes on a Brooklyn Drill sound, in Drake’s drill music ventures. More similar to the former, “Only You Freestyle” features a simplistic beat reminiscent of the UK version of the genre featuring a sporadic and jumpy bass line centered around a quartet of notes from a female vocal choir.

GET LYRIC HERE
What do you think about this song?
We want to hear from you all.
Drop Your Comments
DrakeHeadie One
1
Share FacebookTwitterWhatsApp
You might also like
Music