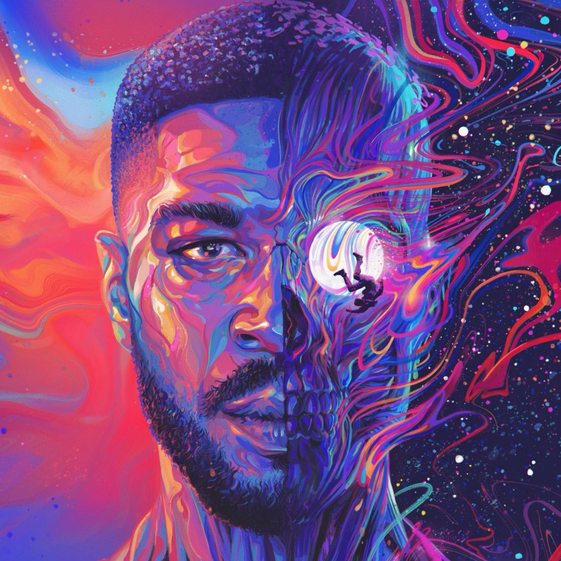 The philosophy of the Man on the Moon concept is displayed in this cover art by the split duality of Cudi’s face. The background of the right side (his left) appears galactic with dots representing space entities. His eye is the moon itself with himself falling off it representing self-reflection; the moon is in his sight. Man on the Moon has always been Cudi’s expression of self-truth, emotions and feelings. The rawness he brings is what all of us fans love about his lyrics. His Man on the moon side has his face layers literally pulled back revealing muscular flesh around his neck and jaw and teeth and bone exposed in his mouth and nose. The left side juxtaposing this with a warmer contrast of the same pallet.

Over a decade since his debut album, the Cleveland rapper returns with Man on the Moon III: The Chosen, his seventh studio album and the third installment in his legendary series.

Ahead of its release on Friday (Dec. 11), he has unveiled a cinematic trailer along with the cover art and tracklist. Divided into four acts, the 18-track set features appearances from Pop Smoke and Skepta (“Show Out”), Phoebe Bridgers (“Lovin’ Me”), and Trippie Redd (“Rockstar Knights”), with production from Dot Da Genius, Take a Day Trip, and his original MOTM collaborators: Plain Pat, Emile Haynie, and Mike Dean.

GET LYRIC HERE
What do you think about this song?
We want to hear from you all.
Drop Your Comments
Kid Cudi
0
Share FacebookTwitterWhatsApp
You might also like
Music